City of License: Oklahoma City
Power: 92 kw
Website: http://thefranchiseok.com/
Notes: In 2013, new owners Tyler Media ended this station’s long run with Classic Rock by signing on a competitor to 98.1 (WWLS The Sports Animal). The KRXO moniker and format were moved to a translator at 104.5 FM (fed by KRXO-HD2).
In 2015, the station’s call letters were changed to KRXO-FM after Tyler added an AM station in Claremore as KRXO (AM) to expand “The Franchise” brand to the Tulsa market. In June 2020, the Tulsa simulcast ended.
As a classic rocker, KRXO was highly successful, fending off challengers and taking audience from AOR station KATT-FM. It also was a solid combo buy with sister Oldies/Classic Hits KOMA.
This station became KRXO and flipped to classic rock in 1987. It was an urban (or soul) station before becoming KIMY on Feb. 25, 1986. When this station signed on as “My 107,” it was promoted heavily with liners like “No punk, no funk, no elevator junk.” 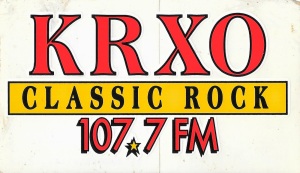