City of License: Oklahoma City
Power: 94 kw
Website: http://www.kj103fm.com/
Notes: This station has been top-40 since 1983, fending off many competitors over the years. The station briefly moved into a rhythmic CHR direction from 1989-1991. Among the slogans the station has used: 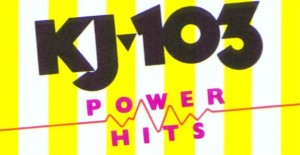 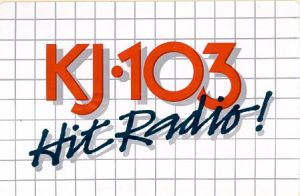 KAFG switched from the old Schulke beautiful music/oldies hybrid format to the rockin’, screamin’ jocks of KZUE in February of 1977. It was THE teen CHR (however, the term “CHR” was not yet been coined) station from 1977 until about 1979, when it lost much of its listeners to the “new” KOFM. But for those couple of years, it was like Drake radio was in Oklahoma City! Hot jingles, screamin DJ’s, TONS of contests, it was something of a sensation. It lasted into 1979 as “The Zoo” when it then became a Light AC station calling themselves Z-103.

It also has an important history that few realize.  It actually was a pioneer for a now storied company. It was the first FM rocker for “INSILCO Broadcasting” which was the broadcast arm of the International Silver Company. Bill Rock of Bill Rock Productions in New York was, I believe, National PD of the stations during the final breaths of Z-103. But it was during 1977-78 that INSILCO Broadcasting was proud of its rockers in Oklahoma City and Miami and decided to branch out a bit. It purchased a small company, “San Antonio Broadcasting Company”… INSILCO spun off the broadcasting division into its own company and named it “Clear Channel Radio” later to become, “Clear Channel Communications”…..So, in effect, KZUE was literally Clear Channel’s first FM rocker. Even the Clear Channel History page has it wrong – showing KJYO purchased by CC in 93 I think. I saw Randy Michaels not too long ago and we discussed the history and he said, “You are absolutely right!” – but obviously never thought of it again, because the false history is still up on the website. Here’s where the confusion came in:  Actually, KJYO only became licensed as a “Clear Channel Communications” station in the early nineties. Before that, it was still licensed as Clear Channel Radio. The company later dumped the “Clear Channel Radio” only to revive it a few years later when the diversification of Clear Channel Communications became too monolithic to not break them up – in name – again.

KJEM-FM simulcast their AM sister in the early days with the exception of classical music on Sundays and some church services.